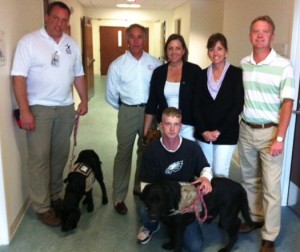 In today’s world everybody focuses on the negatives. Whether it is the media following all the negative news; people noticing the faults in everyone else; and in parenting, where wrong behavior doesn’t go unpunished and right behavior is seldom rewarded. Having a 5 year old daughter, I fell right into the trend. Little time was spent praising her for the things she did right, while most of my energy was focused on the negative things she did.

Fortunately, I was privileged with an internship, training future service dogs. Training a dog requires patience I never realized I could have. And while I was training the dogs, they were also training me, unknowingly at first, how to be a better parent. With training a dog, simple tasks are easy. Sit; down; stay; come; they are all very basic, while more advanced tasks such as opening a door or turning on or off a light are very time consuming and stressful on both dog and trainer.

Shaping the behavior of a dog as well as a child requires a constant presence, almost as if you had eyes in the back of your head, as well as consistent positive and negative reinforcement. Focusing on just the bad things pushes the bond needed away and reinforces negative behavior. Focusing on just the positives they tend to push boundaries, create their own limits and their own agendas while you are taken advantage of.

The dogs, as well as children can sense when they are in charge of a situation.  You can’t make it personal, but at the same time you can’t lose. Again being patient and calm, making your commands firm, known, but again being unemotional is the key, and at times very difficult.  Always ending on a positive note is key for the dog to learn and be enthusiastic about trying about the following day or next time the switch is presented.

The same idea applies to children. Each child is different and has their own motivation and agenda they work off of, so each child ultimately requires different techniques to get the appropriate response from. But with that, the same basic concepts apply. Finding something rewarding for them, and being a constant presence with the rewards as well as firm and fair with the punishments.

As I said before, in the beginning my parenting techniques were not very well established. My patience was low, and I rarely rewarded her for doing something right, but harped on her for what she would do wrong.  A lot of it is a learned trait picked up from how I was parented, and though I have no problems with how I was raised, I believe there are always ways for things to be done better. I know the reactions I received as a child caused me to rebel a lot more than most kids, and I feared the same out of my daughter.  Working with the dogs has slowly but surely molded my behavior into a more efficient way of parenting. Having the patience to work through difficult learning experiences and understanding how far a dog can be pushed can also be applied to my parenting techniques with my daughter.

Working with the service dogs has given me a common connection for teaching my daughter, and the dogs have trained me just as much if not more than I have trained them. There is still a lot of work and progress to be made for me, but the foundation is there, and continues to grow. It has come with mixed reviews, as I still don’t have it all right, but has brought out a new person in myself as well as my daughter. She has her set boundaries, knows what is expected of her, and loves the new found rewards she gets for doing it right.