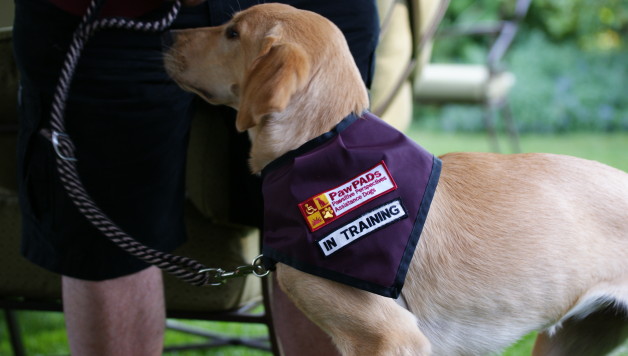 Tee it up for the Troops has been a partner and friend of PawPADs for three years, and we never forget to express our gratitude.  As you know, the “PawPADs Difference” is that we use the value of the training and association with the dogs during training as therapeutic – sometimes healing – always inspiring  tool while the dogs are in the journey from puppyhood to partnership. We built our Paw Corps Program on a donation from TIUFTT and your continuing support has helped us grow and “grow up.” We aren’t the biggest Service Dog organization on the Minnesota map, but I dare say we are the one with the most integrity and heart and guts! We are making a difference in lives through Paw Corps and all our programs and we are proud to have TIUFTT on our side.

Recently we placed two dogs (Kachina and Hania), which were trained by Veterans in the Paw Corps program as Diabetic Alert Dogs.  Jill, whose 8 year old son, Nick, is partnered with Kachina, has told us that Kachina is “literally a life saver” for her son…alerting them in the middle of the night to Nicks dangerously plunging blood sugar levels.  Hania has been partnered with Katie Stuber, a volatile diabetic whose blood sugar levels rocket and plunge with alarming and life threatening speed. Katie is the wife of Lt. Joe Stuber, a Minnesota National Guard leader who is preparing for his deployment in a few weeks to Afghanistan. Hania will be on guard over Katie’s health 24/7 while Lt. Stuber guards our freedom in Afghanistan.  Lt. Stuber told me recently that If “she (Kachina) alerts just once while I’m gone, he will be worth it.” Hania, by the way, has alerted to Katie’s fluctuations dozens of times in the few short weeks he has been partnered with Katie!

How did TIUFTT make the difference in these three examples of many?