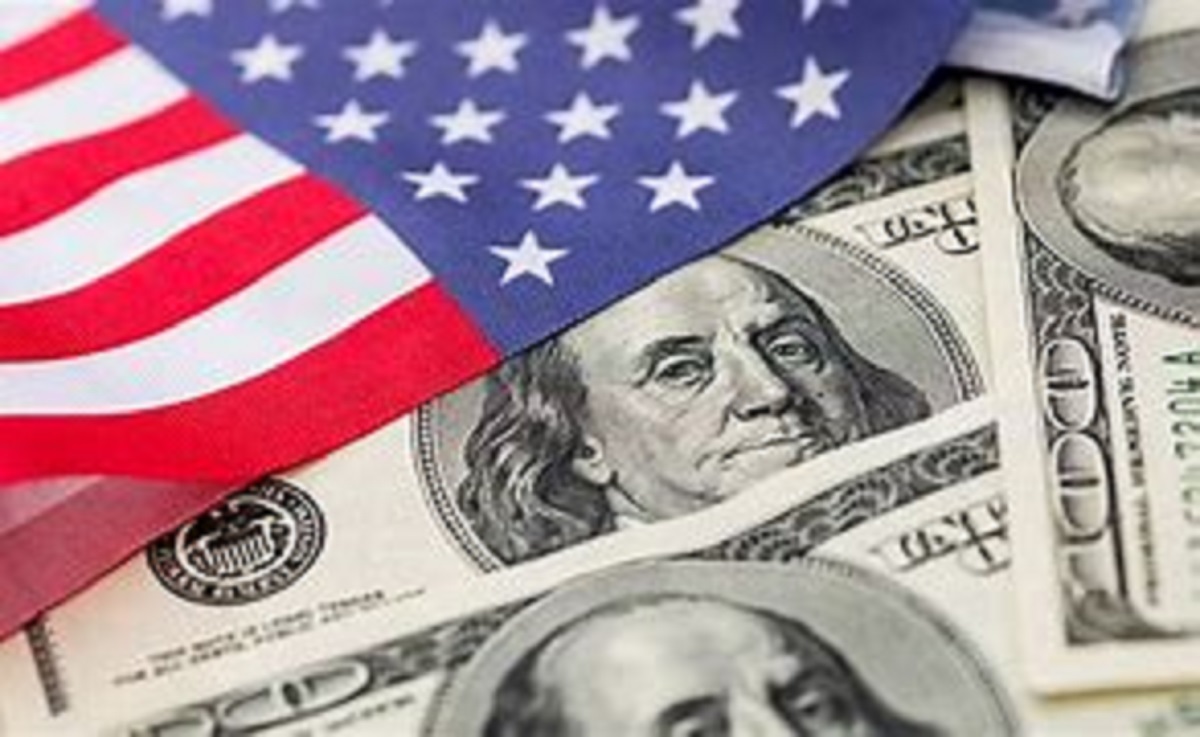 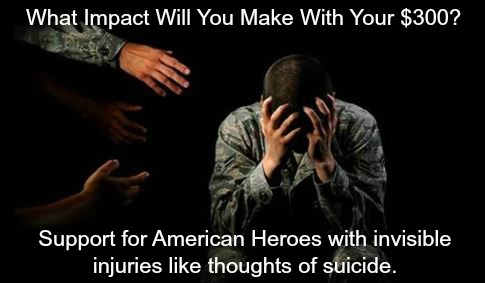 Have you heard the numbing statistic that 22 veterans succumb to suicide every day in the United States? This staggering statistic does not even include the impact of the COVID-19 crisis, which has hit our veterans tremendously hard, intensifying their personal battles with the invisible wounds of war.

At Tee It Up for the Troops, we are making a difference and we are asking for your help. Through the nearly 550 golf charity events help since 2005, Tee It Up for the Troops has granted over $11 million to provide critically needed services to veterans and their families. This year, due to the coronavirus outbreak, we have had to cancel many charity events and are faced with losing critical fundraising dollars we would normally use to support our American heroes.

Unfortunately, the needs of our combat veterans have not been canceled. These men and women volunteered and fought for our freedom and they are not getting the services they need. We believe we can and should do better by them and are asking for your help to be able to do so.

As the end of the year approaches, we hope we can count on you to support Tee It Up for the Troops and military families. Especially during these difficult times, we hope you will donate now and help us fight for those who fought for us!

If you are looking to support a cause that is near and dear to our military and veterans, you can support Tee It Up for the Troops and take advantage of this qualifying charitable contribution. This special pandemic tax deduction is set to expire on Dec. 31, 2020. Donate online today at https://teeitupforthetroops.org/donate

Thank you for your consideration and support! 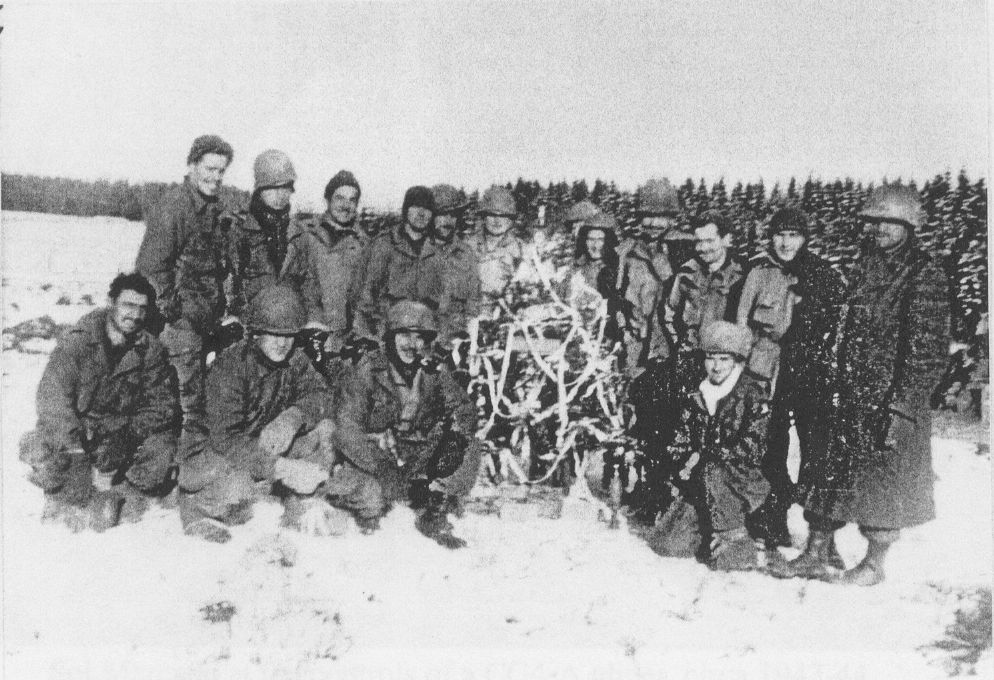 Our nation is replete with military Christmas stories that changed the course of history and made a positive impact on countless individual lives.

For many of us, our thoughts of our military during Christmas often turn to December 1944, that terribly cold Christmas during the Battle of the Bulge. Our American troops were out-numbered, out-gunned, out-supplied, and being asked to hold a seventy-five-mile line in brutal freezing conditions. So dire was the outlook that the commanding German officer asked for a complete and immediate surrender. And we know the one-word reply returned by General Anthony McAuliffe: “Nuts!”

“I spent Christmas Eve pressed against the walls of my foxhole as shells exploded around me all night long. We could hear their guns going off and the shells landing at the same time. They were close. They almost surrounded the whole place. I remember Christmas Day. I got up, and we had a real bad night, with artillery and everything. The first thing I saw was the steeple of a church down in the valley. It was a beautiful day, the sun was just coming up over a little village at the bottom.” – Cpl. Frank D. Vari 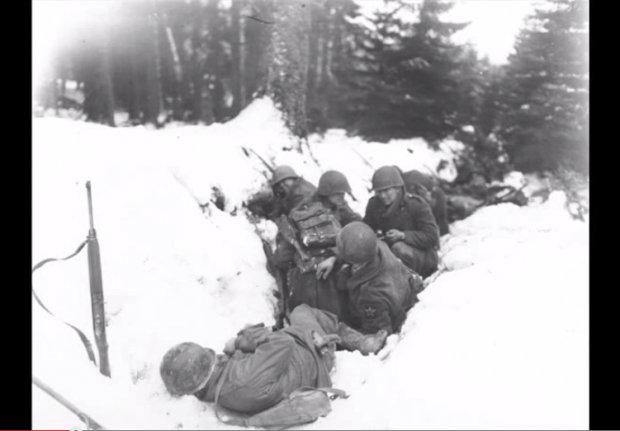 Christmas Carols with a Belgian Family

“We were out in the outskirts of Bastogne; we found this farmhouse. Inside was a man, and a little boy, and a little girl, and his wife. She gave us some soup and some black bread. We stayed there all night in this farmhouse. The war was going on fiercely outside, and for some reason the farmhouse never got hit. We were there Christmas Eve, we sang Christmas songs that night with this Belgian family. We sang Jingle Bells and Silent Night. The words were different, but the music was the same…”

–Keith Davis in an interview with the BBC Witness Podcast 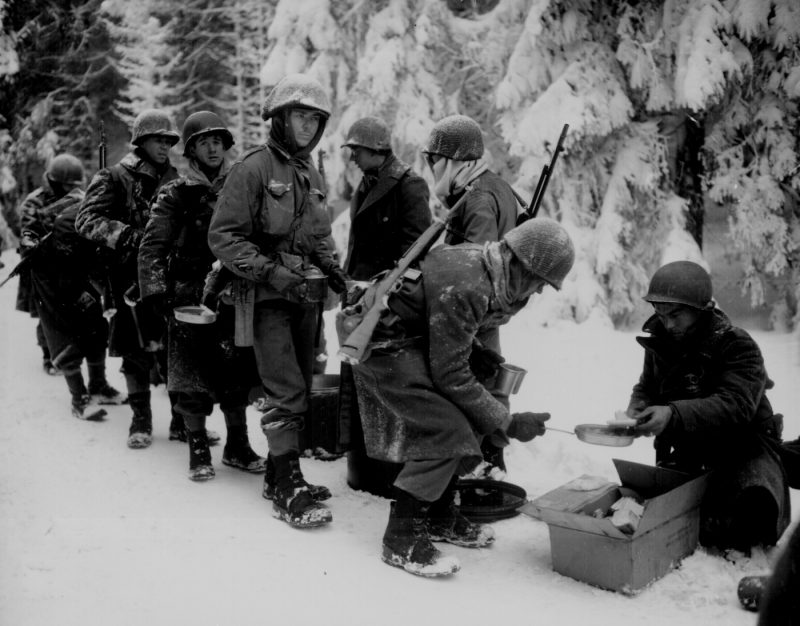 A Christmas Meal with the Germans

A Belgian man narrated this story he experienced as a boy on Christmas Eve during the Battle of the Bulge. He and his mother were alone in their farmhouse in the war’s midst, surviving the unrelenting cold, and the reality of the unknown.

“It was Christmas Eve, and a very cold night. Many soldiers on both sides became lost from their units and were looking for a place to stay. Three American soldiers saw the smoke from the chimney. They knocked on the door and then came in. My mother had a small chicken cooking.

One soldier was wounded, and she tried to make him comfortable. There was a language barrier for a time, till one soldier found out she spoke French and German.  For a while it was quiet, and then suddenly a knock and push at the door. The Americans went for their guns. My mother quickly called out in German, ‘Welcome on Christmas Eve, I have guests!’.  Four soldiers quickly came in.

Four German soldiers, and three American soldiers in our small house, amid war and fighting. My French and German speaking mother says, ‘no killing on Christmas Eve,’ and tells them to lay down their weapons! They were all in the room together. Soldiers who a little while ago were bent on killing each other laid their weapons down. We all shared what food we had; we sang Silent Night in our native tongues. Later these enemies all went to sleep under the same roof.

In the morning, the German soldiers built a stretcher for the wounded American and even gave them directions on how to back to their lines.

I often think of the gift these men gave to my family that night, the gift they gave to each other.” 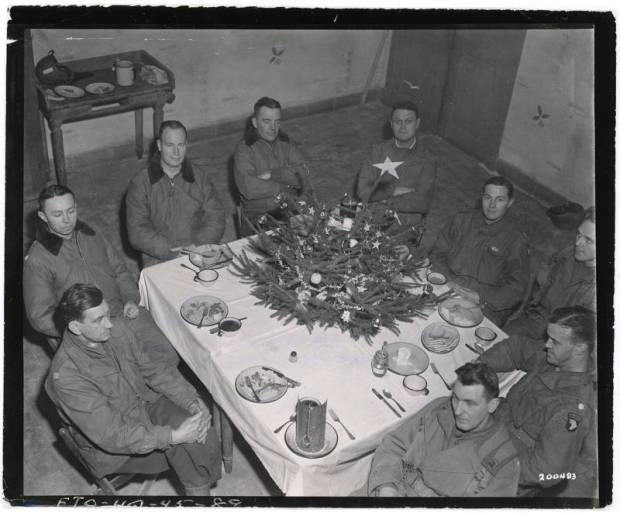 Tee It Up for the Troops this Christmas

Our vision is to help active-duty service members, veterans, and their families from all branches and all conflicts to heal, transition, grow and thrive.

There are many ways for you and your business to contribute to our mission of serving soldiers and their families. We encourage you to read the current-day stories of hope and resilience on our website. We invite you to see how we are investing your donations. We hope you find a way to support a veteran and their family today. You can donate immediately here: https://teeitupforthetroops.org/donate/

From all of us at Tee It Up for the Troops,