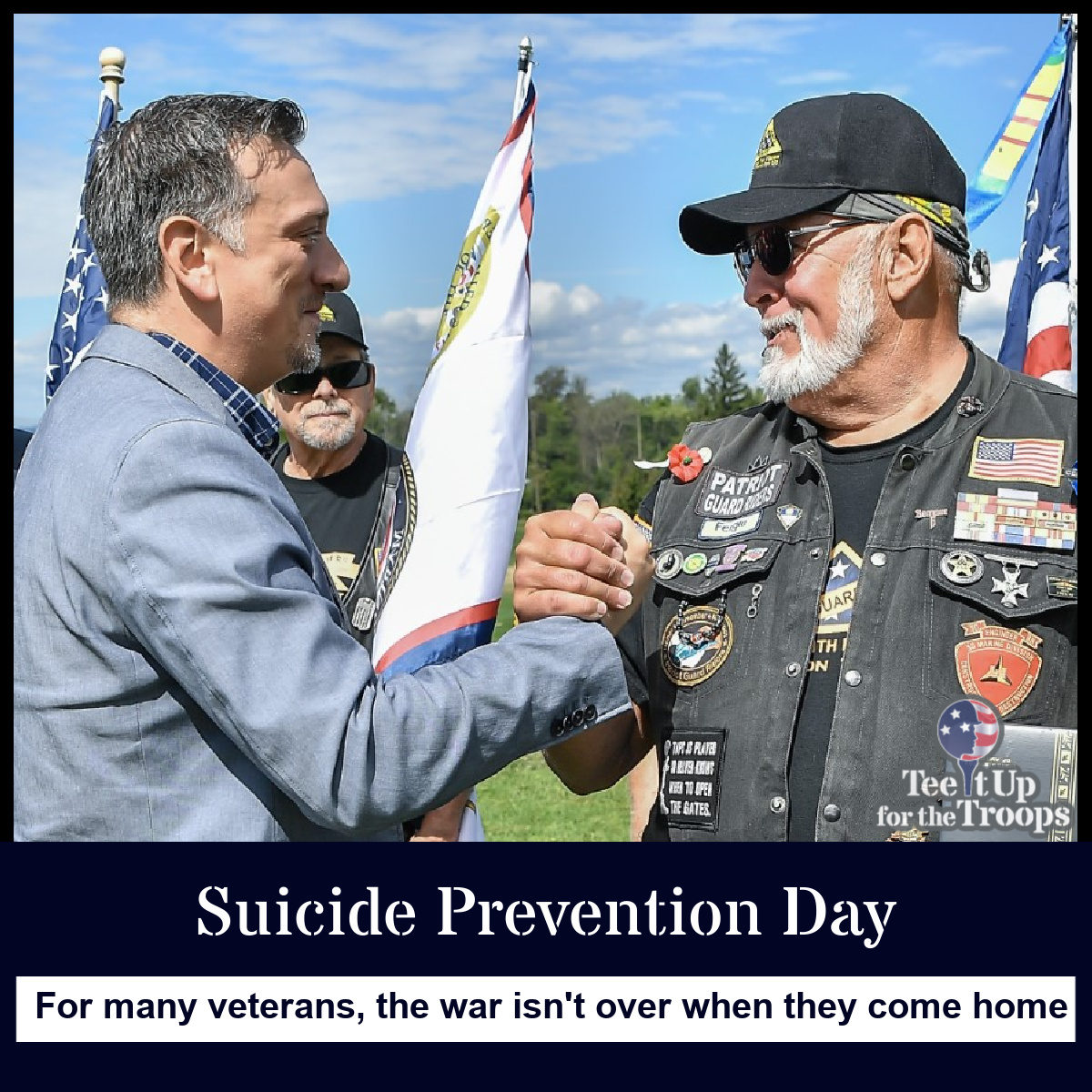 The facts are in front of us, and the number of veteran suicides compared to the civilian population is disproportionately high.  Twenty veterans a day is 20 too many. Veteran suicide awareness is the war in front of us, a daily battle that is on the forefront of our organization’s efforts and resources. Twenty veterans a day are dying by their own hands. Suicide is the second leading cause of death for our fallen heroes. For every 20 who daily fall, there are scores upon scores who daily struggle, who daily fight to live another day. These are the men and women we present to you today. These are the lives we, together, are fighting for. 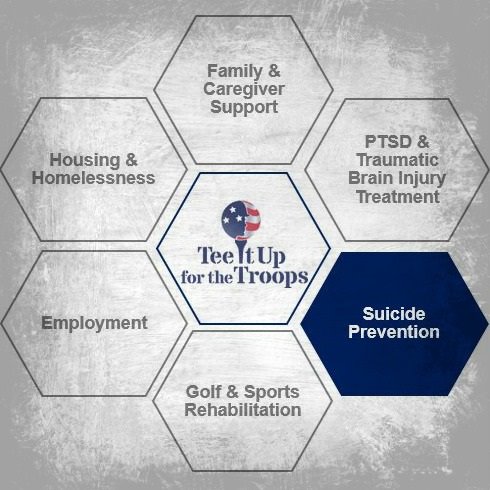 The preceding numbers on veteran suicide are the latest available to us, but the world has dramatically changed since then. Those 20 veterans a day do not include the onset of the global COVID-19 pandemic, which has hit America tremendously hard. Across the globe, and certainly here at home, we have seen not only the physical toll of this virus, but also the mental toll on the general population. How much more so for our veteran brothers and sisters who have already been fighting to keep their mental acuity strong and sound? The year 2020 has been incredibly brutal for these individuals. We propose to make a difference, and we are asking for your help.

Our Tee It Up for the Troops events and REUNION program are instrumental in bringing more awareness to veteran suicide, help fund our efforts, and are powerful ways for you, your company, and your foundation to make a significant difference in a veteran’s daily life. We know that a healthy mental well-being is tied to activating our bodies as much as we are able, being outside, and with the opportunity to socialize. Our events give these veterans something they can enjoy with brothers/sisters outside of war.

You can be the difference in a veteran’s life. Donate today or find an event near you!

Antigua is a dedicated partner and apparel sponsor for Tee It Up for the Troops. In the office or on the green, our staff, leaders, military heroes, and event participants proudly wear Antigua Sportswear that is co-branded with our logo. The Antigua Group, Inc. is a leading designer and marketer of men’s, women’s and children’s lifestyle apparel and sportswear with a 40-year history as a golf apparel provider.

Antigua has always shown strong support for military veterans. From apparel donations to their Annual Antigua Invitational Golf Tournament benefiting homeless veterans in their home state of Arizona, they believe veterans are the lifeblood of this country and will always do what they can to help. 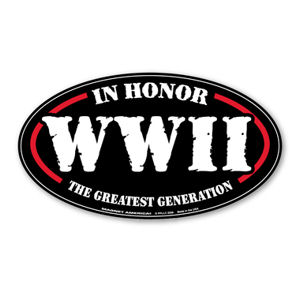 “As a father of a veteran and the son of a World War II veteran, I am so proud that Antigua is involved in Tee It Up for the Troops great series of events,” said John Anderson, Antigua’s National Sales Manager for the Golf Division. “The most important thing is all the good that comes to military veterans through Tee It Up for the Troops and we are just so proud to be a small part of your great events.”

John’s son, Ryan Cole, was an Army Ranger assigned to the 1st Battalion, 75th Ranger Regiment. He was deployed four times to Operation Enduring Freedom and once to Operation Iraqi Freedom. Ryan has a master’s degree from Portland State University in Geology and is currently an Engineering Geologist with the U.S. Forest Service. 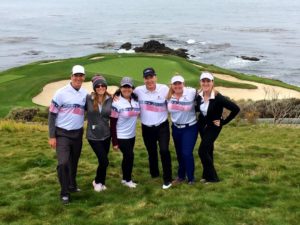 “The support of Antigua helps our veterans and event participants look good, splash patriotism, and stay cool and comfortable while playing golf in our fundraising events, but more importantly, Antigua supports our mission to improve veteran’s lives by enhancing their mental, social, physical and emotional well-being, said Tim Wegscheid, Tee It Up for the Troops President & Executive Director. “We are grateful to Antigua and John for their tremendous dedication to our military heroes. And a huge thank you to Ryan for his bravery and service to our country!” 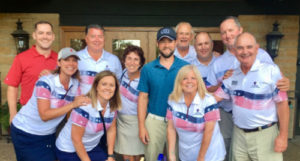 Antigua works with Tee It Up for the Troops to supply many co-branded apparel items including golf polos and pullovers like those seen above. One of our most popular patriotic pride apparel items is the Antigua Patriot Golf Polo, also shown above, which has the good old red white and blue across the stars and stripes print on the shirt’s chest.

Thank you, Antigua, for all you do for our veterans! For more information about Antigua Sportswear, Shop Antigua.

SECOND YEAR IS A SELL- OUT! 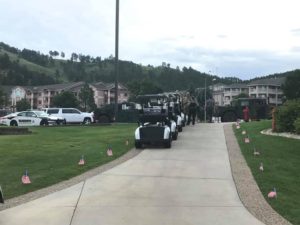 The second annual Tee It Up for the Troops-Black Hills, South Dakota event on July 20, 2020, at the Arrowhead Country Club was a success on the green and beyond!. The event honored U.S. military service members and benefited those who have been wounded in the defense of our freedom.
The Tee It Up for the Troops Black Hills event is led by Joey Franze, a Captain in the Air Force’s Medical Service Corps, who is currently stationed at Ellsworth AFB, SD. Joey has served 11 years in the Air Force and previously served as a medical technician who supported Operation Enduring Freedom (Afghanistan) and Operation Iraqi Freedom.

Spending years in the military medical field, Joey has had the opportunity to work with all branches and has seen the need for resources that sometimes can only be provided outside the walls of a medical facility. “After working with Tee It Up for the Troops to get our first two events off the ground, I have experienced firsthand the positive impact that the game of golf and our event has had on our Black Hills veterans as well as the local community and together we are working to close the gap and make a difference,” said Joey Franze, Tee It Up For Troops-Black Hills Tournament Director.” 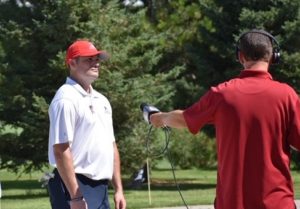 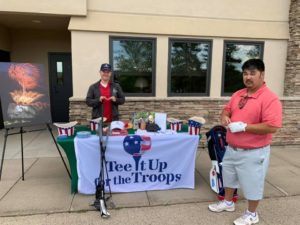 Some of the other changes that were made included limiting the registration table to no more than one person per team, limiting the course to 25 teams or 100 players to ensure that the course was not over-run, and a box lunch that could be picked up at two locations on the course instead of having a reception after the event. The entire event was held outside including opening and closing remarks and the awards ceremony.

“In this time that we are all currently going through, finding ways to connect with our community is more important than ever,” said Franze. “At the end of the day, we wanted to ensure that everyone at our event had a great experience while remaining safe. Even with COVID-19 restrictions on how a golf event can operate, we had 100 participants which were a 40% increase from last year. We had to turn away teams. Next year though, if the restrictions are lifted, we are aiming at 144 participants!” added Franze.
In just its second year, the 2020 event nearly doubled the fundraising efforts of the first year, raising almost $7,000 for our military heroes! The top two sponsors were NewsCenter1 Media Group (presenting sponsor) and Midco (lunch sponsor). There were also 13 other team and hole sponsors from businesses in the Black Hills area. Proceeds from this year support two local non-profits; Super Dogs for Super Heroes, which matches rescue dogs with veterans, and the DTOM 22/0 Foundation, whose goal is to stop veteran suicide. 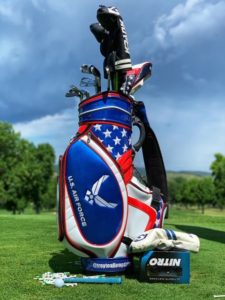 Military support was in full force with 40 veterans and active-duty members who played in the event and others who volunteered. Troy Teal, an Air Force Combat Veteran who is also a five-time World Long Drive Championship Competitor, was also on the course providing entertainment and support. The Black Hills event has quickly become one of the largest Tee It Up for the Troops events in terms of veteran participation in the nation.
Governor Kristi Noem declared Monday, July 20, 2020, as “Tee It Up for the Troops Day” in the state of South Dakota and U.S. Senator Mike Rounds, who has supported the event each year, had some of his staff play in the event.

Behind every great event are dedicated volunteers. Thank you to the 2020 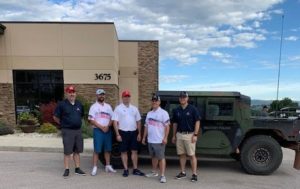 When asked about the Tee It Up for the Troops-Black Hills charity event and what he’s most proud about, Joey said: “How we as an entire community are rallying around our veterans and coming together to create a very unique experience that you can only find in Rapid City, SD….and we are only getting started!”

The 2021 committee is hard at work on creating an event that will be even bigger and better which will be held on Monday, July 19, 2021, at Arrowhead Country Club in Rapid City, SD. For more information on next year’s event be sure to follow them on Facebook at Tee It Up for the Troops-Black Hills. For sponsorship opportunities or inquiries on playing in next year’s event please feel free to email them at teeitupbh@gmail.com.

If anyone is interested in learning more about how this well run event operates or to get some ideas to start your own Tee It Up for the Troops event, Joey would be more than happy to set up a zoom call or other form of communication with you. You can e-mail him at teeitupbh@gmail.com. 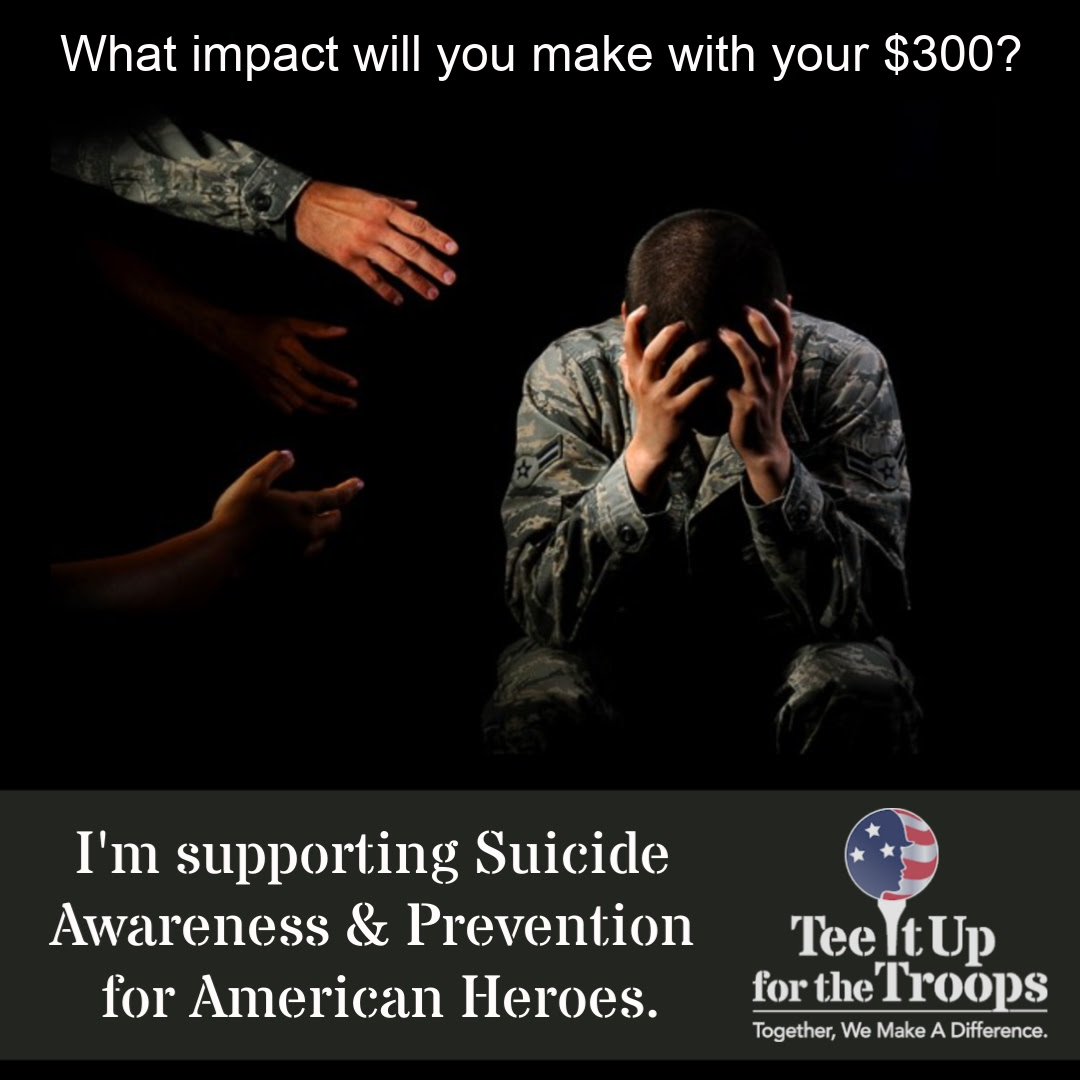 Now is a great time to donate to help our military veterans, who are heroes and have already given so much to us. Giving back to our troops is so much more than simply money. Your donation to Tee It Up for the Troops provides hope, restoration, and new beginnings for our American heroes to enjoy a life with good health, ample opportunity, and continued freedom—the same freedoms and opportunities that they so willingly sacrificed for each of us to have.

Included in the new stimulus bill passed by the U.S. Congress is the CARES (Coronavirus Aid, Relief, and Economic Security Act) Act, which has recognized the desire of individuals, foundations, and businesses to support not-for-profit organizations such as Tee It Up for the Troops with incentive-laden tax benefits. That’s good news for you and your business, and it’s good news for us too because we want and need your help.

How the CARES Act Helps You Donate to Veterans 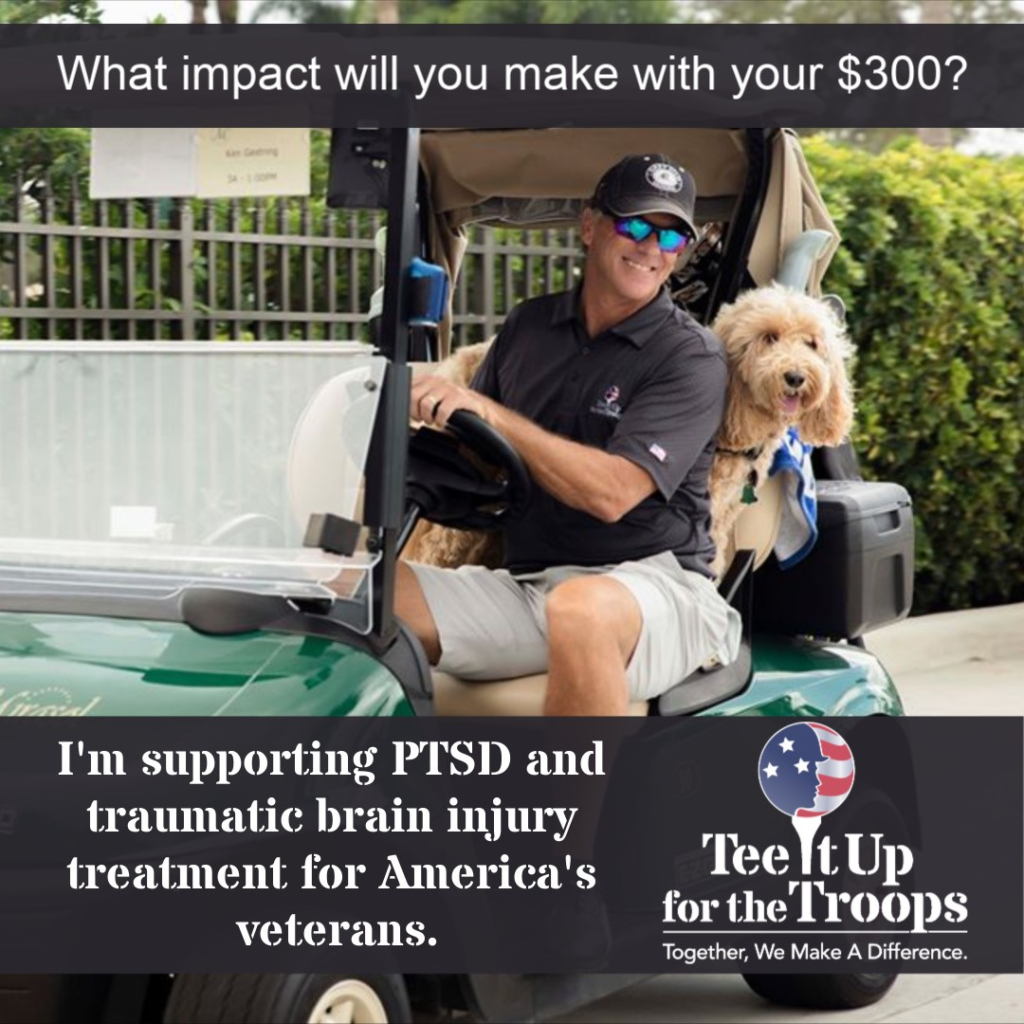 A portion of the new bill provides individuals who and corporations that itemize their charitable giving to deduct greater amounts of their contributions. Individuals can elect to deduct donations up to 100% of their 2020 adjusted gross income (AGI), which is up from the previous limit of 60%.

The new CARES Act also allows corporations to deduct up to 25% of taxable income, up from the previous limit of 10%. You may not be aware, but many employers and foundations are offering to match donations. We encourage you to check with your employer to see if your donation qualifies for a matching gift.

Also, anyone who donates up to $300 for an individual, or $600 for a married couple, can get an easy tax break under the CARES Act. This charitable giving deduction is available for those who take the standard deduction, meaning you do not need to itemize your deductions to enjoy the tax break. This is a wonderful provision written into the CARES Act, and it makes it even easier for you to donate to veterans today.

Know that your charitable giving is so much more than a tax deduction; it is life-giving change to veterans who have already given and sacrificed for you.

You can be the difference in a veteran’s life. Donate to veterans today through Tee It Up for the Troops.