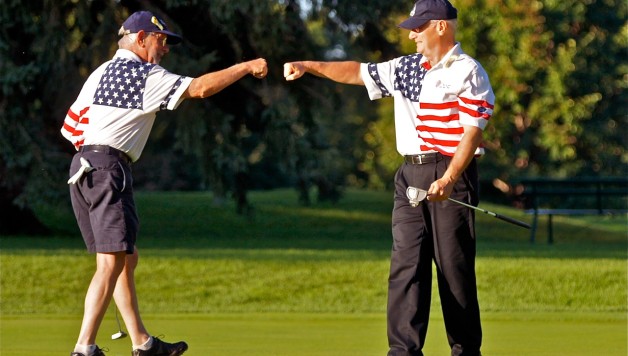 Last week I had the pleasure and honor to attend the Opening Ceremony for the 7th Annual Tee it up for the Troops National Day of Golf.  As in past years, I was deeply moved by the patriotic display of remembrance and respect for the service of our military men and women.  As I took time to mingle with those in attendance I asked myself how many people have taken time out of their busy schedule to attend an event like this and visit with someone who has served in the military?

This event provides an opportunity to do just that.  It is an event that honors the service of all military personnel across all branches and conflicts that our military has been involved in.  One of the most memorable moments for me was to see two rows of WWII veterans with front row seats to the Opening Ceremony.  Afterwards, I took the time to thank some of these veterans for their service and in exchange I heard a first hand account of one veteran’s experiences during the Invasion of Normandy.  He was even planning a trip to Normandy next June to take the ashes of a fellow soldier to the Normandy American Cemetery and Memorial. I realized after talking with this WWII veteran that his story being told in his own words had more of an impact on me than any history class or book could have demonstrated.

During the ceremony I noted that many of the veterans had been given yellow ribbons to wear, which helped me identify those who had answered the call to duty.  The impact behind the significance of the ribbons was made evident as I watched several veterans interact with each other.  I saw many of the veterans reach out to each other in greeting as one another passed by.  They would share a brief bit of their military experience with the other and all the while they would have a smile on their face or a tear in their eye as they continued to hold onto the arm or the shoulder of the individual they were talking to.  It was reminiscent of long lost brothers being reunited after spending years apart.

As the ceremony drew to a close and I looked across the crowd of people gathered there, I realized how many more stories I had yet to hear.  Besides the veterans I had already met, there were also Gold Star Families (families that have lost a loved one in military service), Wounded Warriors (severely wounded or injured soldiers), Tribute to the Troops members (organization dedicated to honoring our fallen heroes) and many others who had all united that day to honor, respect and remember the sacrifices of all veterans and their families.  Thank you to Tee it up for the Troops for hosting events like this and providing me the opportunity to connect with those who have served to protect this great nation.  I have a greater sense of connection and community with our “protectors of the turf” and their families, and I am grateful.

Tee it up for the Troops and Polaris Industries have partnered to present you the opportunity to win the pictured 2012 Victory Motorcycle.

If you are interested in learning how you can purchase a $20 raffle ticket you can contact our national office via email at info@teeitupforthetroops.org or by phone at 952-646-2490.  Please note that a purchase of a raffle ticket does not constitute a tax-deductible contribution to Tee it up for the Troops.  The winning ticket will be drawn on December 9, 2011 and the proceeds from the raffle ticket sales will benefit the men and women of the US Armed Forces and their families.